Asian Stocks Are In a Strong Upside Movement On Monday, Oil (Brent) Goes Down

Trading on Monday started with positive mood. Asian indexes and stocks are trading in the green zone, oil has stabilized slightly before the meeting of OPEC+ 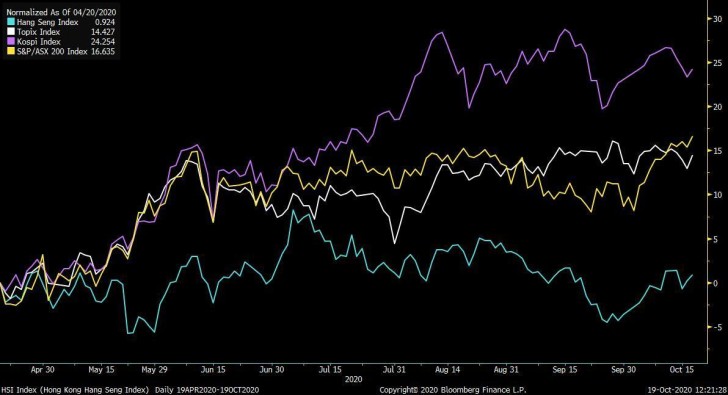 Asian shares rose on residual expectations for a new US stimulus package on Monday, while Shanghai and Hong Kong paved their initial rallies after the reports showed that China's economy was rising at a slower rate than expected.

Hong Kong gained 0.9% and Shanghai gained 0.3%, but after China published figures which demonstrated that world economy number two grew slower than anticipated in period between July and September. Hong Kong has increased slower than analysts expected.

The energy minister of Saudi Arabia dared to test oil speculators when OPEC and its allies gathered last month to try to balance global markets. Now that an up-and-coming pandemic is again affecting demand, the time to count is approaching.

The crude producer alliance is meeting on Monday to analyze the status of the market. There are no supply decisions until Dec. 1, but leading participants are now growing their diplomacy, Saudi Arabia and Russia.