There is a surge in activity with every market correction, but now there are much more shorts than usual. 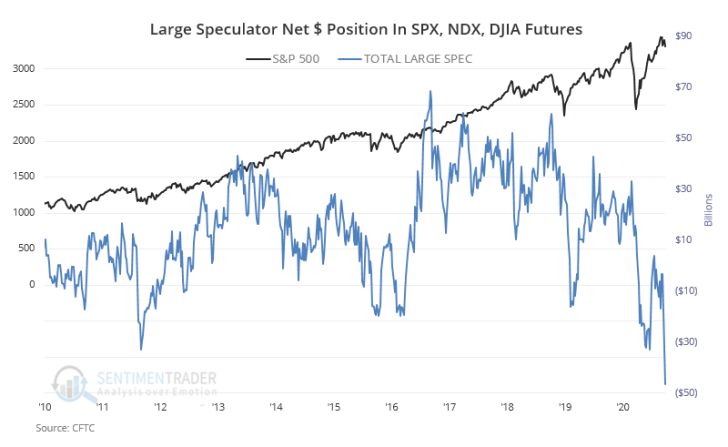 More hedge funds and other major speculators have now short traded major index futures than at any other time in the past decade.

According to the @sentimentrader, large hedge funds have short positions of more than $47 billion.

This happened against the background of the market correction over the last time. Even though the correction itself has not yet reached critical levels and the markets remain in positive area after the rapid summer growth.

However, it should be noted that according to the chart, short positions spike every time a drawdown occurs in the market and subsequently declines as the market recovers. However, speculators bet the most on this correction.

Stocks
23 Oct 2020, 22:10 PM
Apple (AAPL) Stocks Bearish Pattern Is Detected, It Might Go Even Lower, According to the Tech Analysis
New fall is ahead as new bearish pattern emerges on the stocks of the biggest technical company.

Latest News
Facebook (FB) and Netflix (NFLX) Stocks Unusual Dark Pool Activity, More than $200 Million Each
2 days ago
Apple (AAPL) Stocks Bearish Pattern Is Detected, It Might Go Even Lower, According to the Tech Analysis
2 days ago
Tesla (TSLA) Stocks Are Down by 1.2% due to 50,000 Electric Vehicles Recalls in China
2 days ago
AMD Stocks Jump by 3% on Intel (INTC) Fails, More Challenges from AMD to Come, the Expert States
2 days ago
US Dollar (DXY) Is About Third Bear Market Since 1980, Jeroen Blokland Says
2 days ago
Tesla (TSLA) Stocks Still Could Hit $547 by the End of October, Despite Weak Market Reaction for Q3 Great Report, Trader States
3 days ago
Intel's (INTC) Stock Fell by 10% after Q3 Report Showed the Worst YoY Revenue Decline Since 2015, AMD Stock Rejoices
3 days ago
Nio (NIO) Stocks Are Still Bullish, but Need Time to Consolidate, Trader States
3 days ago
Tesla's (TSLA) Stock Rise by 3.2% on 'the Best Report in Their History', according to the CEO of the Investment Fund
4 days ago
Nasdaq (NDX) Might Crush and No One Is Ready for this Scenario, the Expert States
4 days ago
Follow us on Twitter