Dow Jones and S&P 500 are still far below Nasdaq even after the bullish post-election week and Pfizer vaccine promising news.

Dow Jones Index Is Still Below the January ATHs

Despite a meteoric week of gains, the two big US indices, the Dow Jones Industrial Average and S&P 500 are still far behind the Nasdaq 100 in terms of annualized returns, even as the stock market rebalances and more and more tech investors leave.

According to Michael A. Gayed, portfolio risk manager and market analyst, notes that despite the rapid growth, the Dow Jones is still below its values ​​at the beginning of the year, the yield continues to be negative.

Despite the strong post-election stock market rally, the YTD performance of the Dow is still negative as of last week. $DIA $QQQ $SPY #Dow #performance Michael A. Gayed via Twitter 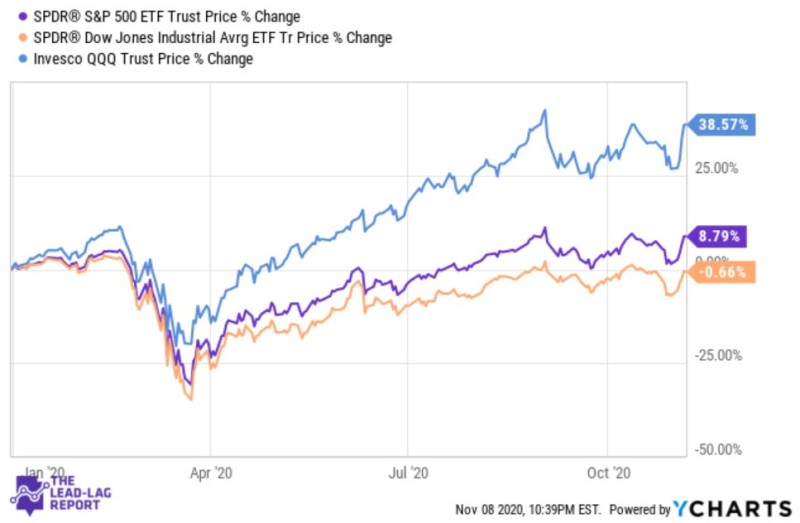 The return on the S&P 500 index also shows no miracles, being at the level of 8-9%. At the same time, the Nasdaq, despite the ongoing exodus of investors from technology stocks and the tough September correction that hit the big tech companies the most, is showing incredible results, staying at + 38% since the beginning of the year. Thus, it was on the Nasdaq that the coronavirus had the lowest result.

Nevertheless, the market may soon expect a continuation of rebalancing towards companies in other sectors. The process began earlier this week when it became known that Pfizer is as close as ever to a real coronavirus vaccine, as clinical trials have shown promising results.

The news sparked a precipitous bullish rally in the S&P 500 and Dow Jones, with a parallel decline in Nasdaq technology stocks. Besides, overall, this week was extremely productive for the stock market, as it broke the record for the volume of new funds entering the market.

In addition to the positive news about the likely imminent creation of a working vaccine against coronavirus, the markets were also influenced by the news about the victory of Joe Biden in the US presidential election. After the appearance of the anticipatory results, the markets, being in euphoria, began to grow rapidly.

Latest News
How To Find The Best Stock Broker With Reviews
16 minutes ago
Investing in Dual Citizenship: What Are the Best Investment Options to Obtain a Second Passport
4 days ago
Investment Property Financing & Debt Service Coverage Ratio Loans
1 week ago
Implementing Sustainable Strategies This Year In 4 Effective Steps
1 week ago
How to Transfer Crypto Using a Mobile App
1 week ago
Unexpected advantages of nearshoring: a few reasons to try this way of development outsourcing
1 week ago
Investment Opportunities To Help Diversify Your Portfolio In 2023
1 week ago
Most popular cryptocurrencies
4 weeks ago
Learn the basics of investing in Ethereum
1 month ago
Can a trader make money on social media and if yes, how can they efficiently promote their page on Instagram in 2022
1 month ago
Follow us on Twitter