How Blockchain is Revolutionizing the Mobile Industry

Even after blockchain has grown greatly beyond its set horizons, most people still think of it only as the technology fueling Bitcoin and other cryptocurrencies 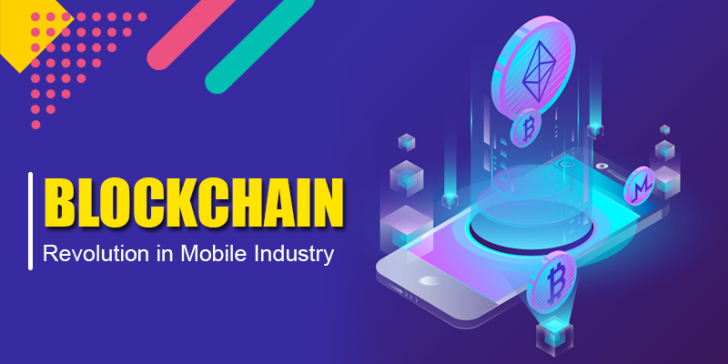 Even after blockchain has grown greatly beyond its set horizons, most people still think of it only as the technology fueling Bitcoin and other cryptocurrencies.

Surely, these cryptocurrencies are the very basic and huge part of blockchain but this is not the only potential area that this technology serves. The blockchain technology is quite vast and has already made major inroads into every single industry you can think of! Amongst these industries, mobile application development is the one, which is ruling the world.

Now, before we head towards discussing the impact of blockchain on the mobile application development industry, let’s have a quick recap on what made blockchain so popular.

Blockchain turned out to be notable with the introduction of Bitcoin. During the initial days of cryptocurrency, there has been confusion in most people’s mind when they came across both the terms “Bitcoin” and “Blockchain”. They believed them to be the same!

However, blockchain and Bitcoin are certainly not the same. The blockchain is an innovation behind Bitcoins while on the other hand, Bitcoin is a cryptocurrency, a form of electronic cash. Blockchain enables users to make and check transactions in the form of distributed records, specifically in a decentralized authority. Blockchain has opened up a new field of development as well, widely known as blockchain development.

Now, let’s continue with how this highly witnessed technology is impacting the mobile application development.

In reality, blockchain is a ledger system that is powered by an expensive computer network sending and receiving data to and from each other. When any piece of information experiences a change, that change is transmitted to all other computers of that network. The change is transmitted to the computers, which hold the same ledger and after the changes take place, the values are adjusted accordingly. Mobile technology does require such type of efficient approach as mobile networks experience a heavy flood of users on the channels who want to get data wirelessly. This results in loss of some information. As blockchain offers more advanced storage and data streaming, this problem in mobile networks can potentially be solved with the blockchain app development.

Blockchain records every transaction and has a feature that enables the tracking and sharing of data. There is no chance of falsification as all the information is reflected in the system. This made mobile apps having blockchain technology to have a more secure environment and avoid having fake information or transactions. Blockchain technology provides a robust system and makes it a hundred times easier to segment and categorize information, verify it, and secure it all at the same time. As all the data is stored in the ledger, it is visible to all, which results in offering more transparency in the system. Having a mobile app that incorporates the feature of blockchain is beneficial in many ways.

Blockchain has revolutionized encryption especially when incorporated with in-app development. Creating an application that needs to be accessed by multiple users and keeps the information of each user safe and secure has become easier with blockchain technology. Any user without the decryption key cannot access the information and this has become one of the failsafe strategies being opted by even the best blockchain developer India.

Let’s have a look at what else it will do to revolutionize the mobile application development:

A number of mobile applications are not able to make the most out of their efforts. The reason behind it is the in-app purchase issue. In-app purchasing is being put into functionality because majority of the world’s population is now using smartphones and it is easy for them to make in-app purchases. But required payment methods, e.g. credit cards, are unavailable to them and even if they have access to these methods, the processing fees and the possibility of fraud make them refrain. However, if the decentralized model is incorporated for in-app purchasing, it becomes much easier for the users as they can make payments in the form of coins and eliminate the process of using the credit cards as well.

Blockchain will improve the advertising model

Currently, developers are using the cost-per-installment approach to fulfill the advertising needs and reach their target audience. This approach involves a number of middlemen and the profit is distributed after reducing the amount returned to the developers. With the aim of improving this advertising model, blockchain replaced the cost-per-installment approach to cost-per-attention approach. In this strategy, the users who spend more time on the application are rewarded with coins that inspire them to make in-app purchases using those coins. More profit is experienced by the developers as there are no middlemen in this model.

Blockchain will streamline app approval and make it transparent

In order to get the application approved, developers need to approach one of the two app stores – Google Apps and Apple App Store. The apps need to undergo a cumbersome approval process, which sometimes proves to be unfair for the new developers. Blockchain streamlines the process as under this model, apps get approved via transparent developer reputation system and the decentralized public ledger is consulted.

It has been proved that Blockchain has the potential to streamline mobile application development in many ways. The merge of this technology with mobile application development will become more prominent once they both mature out a little more. If you are also seeking a blockchain developer India for your business, get in touch with SoftProdigy. One of the promising blockchain service providers serving clients throughout the world. Contact now for more information.

Soumyajit has been in the IT industry for over a decade. He is dedicated to share his expertise in understanding tech companies with others.