7 basic things you need to know about Blockchain: A beginners’ guide.

So you have heard the word “Blockchain” and maybe “Cryptocurrency” and “Satoshi Nakomoto” wondering what or who they are? 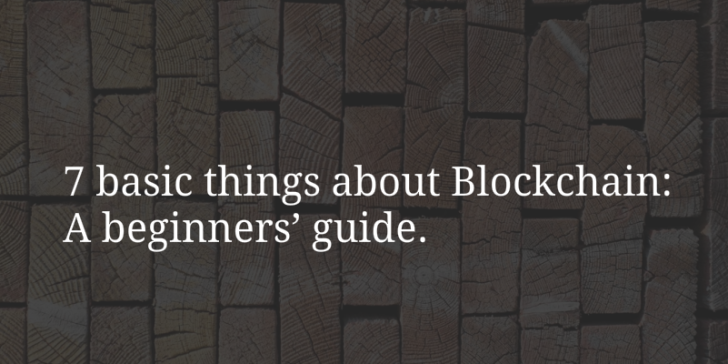 So you have heard the word “Blockchain” and maybe “Cryptocurrency”and “Satoshi Nakomoto” wondering what or who they are? I understand they can be like what everyone is talking about without actually talking about them. Read on with me and I would break down this chain of Blocks into bits for you to understand. Truth is, Blockchain has passed the level of “WHAT IS” to its real life applications, but if you are new in the industry, don’t worry you are not still late.  Let’s begin.

The evolution of human society cannot be complete without keeping records, From the 17,000 years old cave paintings of Lascaux to the Dead Sea scrolls. These and many more were evidences of a natural human desire to keep records, which would outlive them. A historical evidence to say: “hey look, I was here.” In fact, record keeping is a way of human behavior. We keep records of birth and death, and so many memories precious to us. The concept of history is also based on record keeping. In the past, cultures and traditions were passed down orally to continue a particular civilization, until the birth of writing. The beginning of writing also gave way to the birth of money, for the goldsmith who kept valuable items, needed to keep records of the transactions. The ideas that embody record keeping is enormous and cannot all be captured in this article. Practically, we keep records in our diaries which is usually a paper or book or ledger or a file. Until we evolved into online record keeping and sharing of data. The basic element for a record to be possible is a ledger, a diary, a book, a canvas. Call it anything. It is the surface on which the idea, time, date, transactions etcetera is scribbled upon.

However, paper does not really last that long and is easy to lose. And so our computers and tablets became a way to store and keep records, for faster, easier access. But the problem became how to protect our data and records from outsiders and prying eyes, and also how to keep public records or transactions open and correct without manipulations, fraud, and alterations. Since the invention of the internet, people have trusted the big corporations like Facebook, Yahoo and Google to keep their records safe. Not until the Facebook–Cambridge Analyticadata scandal of March 2018, the Yahoo data breachesof 2013, 2014 and 2016, and the Global financial crisis of 2008 that people began to seek alternative solutions to protect their data.

The Big book of Blocks.

That is what brings us to the concept of Blockchain. Some people had called it the internet of value, the security of securities etc. But what is Blockchain really?

Blockchain is simply a book. A big book of data or records that cannot be hacked or tampered with. According to the Blockchain institute of technology:

Blockchain is a constantly growing ledger that keeps a permanent record of all the transactions that have taken place, in a secure, chronological and immutable way.

The implication of this technology is that record keeping would now be faster, safer and secure. I would not go into details in this article of how the technology works, so as not to bore you with hash functions and Markel tree theory. Etc.

But here is what you should know and hold unto:

First Blockchain is that your book, diary, file, etc. that you kept all your records in. yes the BIG BOOK OF EVERYTHING.

Blockchain made p-2-p (peer to peer) payment protocolpossible. What this means is that you don’t need an intermediary to verify data or transactions. The system manages that.

Just like you constantly write something in your diary, so does the records continue to grow. Imagine stacking books continuously upward and watch it climb like a ladder. And each transaction or record follows immediately after the previous and continues the process.

Another important feature of this book is that once any transaction goes in, you cannot reverse it or take it back. It’s one way directional. This helps in preventing fraud and manipulating records especially public records. So it calls for carefulness and verification of data before uploading into the block. And this has been called Blockchains’ immutability.

Imagine when you are expecting a package and you are giving a tracking ID to track your delivery, it is almost the same way you can track your transactions. Every transaction is tracked and verified by multiple computers out there and stored in a tamperproof way.

Transactions in Blockchain are permanently there. This ensures that someone doesn’t wake up after a bad dream and deletes transactions and records (game over). So don’t worry, it can’t be cleaned.

Nice try hackers, but this is secure and you can’t hack this. This is because transactions or data is tied to the previous block and once one is tampered others would fall apart. So it can’t be done because Blockchain is distributed across multiple computers, so it is not under an individual’s control, and one would need to control majority of the players to change a transaction which is highly unlikely.

In summary, therefore, whenever you hear the word Blockchain or when most ICOS talk about it in a more confusing and technical way, just know they are talking about a book of records that cannot be tampered with. There are many Blockchains out there, but the first Blockchain was the Bitcoin Blockchain.

Hilary is a writer with passions in fintech and blockchain. He creates articles about crypto and writes poetry in his spare time.