How much money is in the world?

How much money is in the world? It depends on what exactly you count. Let’s cast a look at experts’ opinions and modern research. 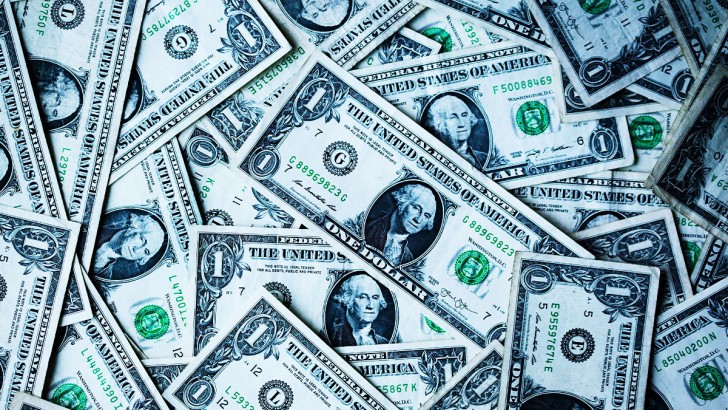 We are well aware that money is the equivalent of the value of goods and services. Today, money exists in diverse forms starting from ordinary coins and banknotes to digital and informational sources. At the same time, the amount of all funds in the world is also constantly changing. Have you ever thought about how much money is in the world? An accurate answer does not exist because there are a variety of concepts and ways to calculate money. Nonetheless, we will try.

We will start by establishing the amount of money supply circulating in the economies of the world. To put simply, they include the following:

According to FINFOCUS estimates, the turnover of the above-mentioned money is $80.9 trillion (taking into account long-term deposits).

But this is only part of the money supply. Everything else, a much larger share, is electronic currency and securities. According to experts, the amount of such money varies and might reach $ 1.28 quadrillion. There are also foreign exchange reserves in each country.

All world's gold costs $10.4 trillion, while silver - $14 bln. The IMF and central banks account for 17% of precious metal stocks. Over the year, all countries make about 3,000 tons of gold, increasing growth by 1.6%. 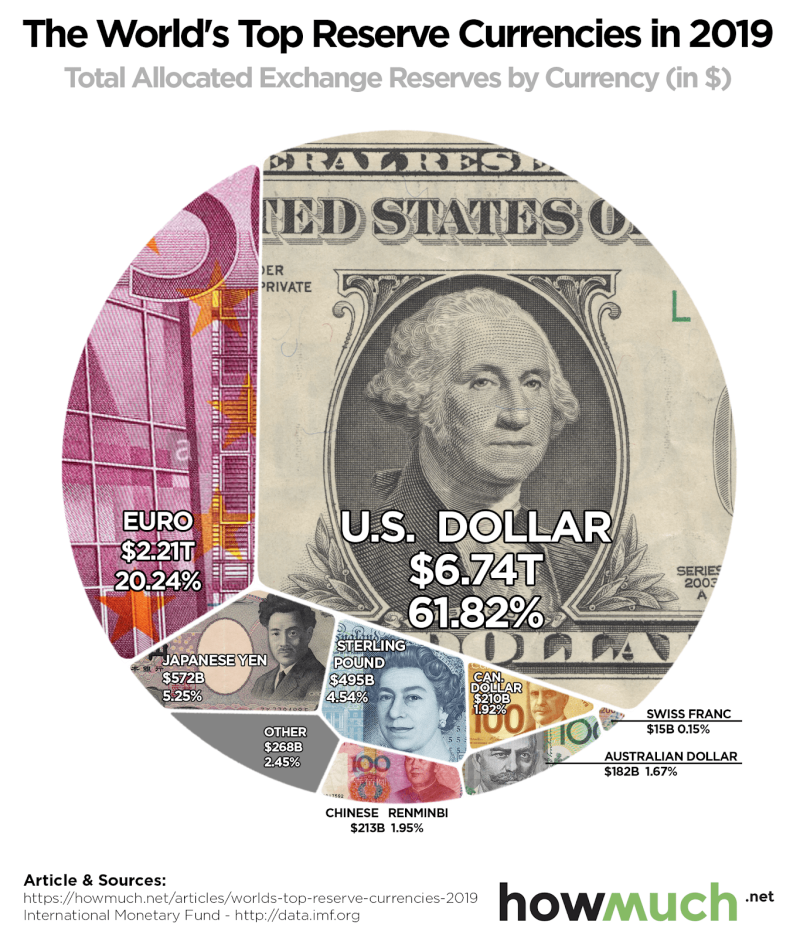 Today, there are 157 currencies circulating the territory of 194 countries. In the equivalent of the American Dollar, the overall value of this money is $80.9 trillion, $5 of which is in the form of coins and banknotes. The most popular currencies are the US Dollar, Euro, Great Britain Pound, Yen, Swiss Franc, and the Australian dollar. Some countries do not have their own currencies and use the monetary units of other countries. In some states, two or more currencies are in circulation.

The 21st century is the era of the "digital" economy, which means non-cash payment instruments prevail. They have an exclusively electronic (digital) form – population prefers electronic money thanks to the convenience of its use. This tendency is gaining momentum.

When it comes to electronic money (money on the accounts of various wallets, payment systems, etc.), there is no research providing any hypothetical numbers. 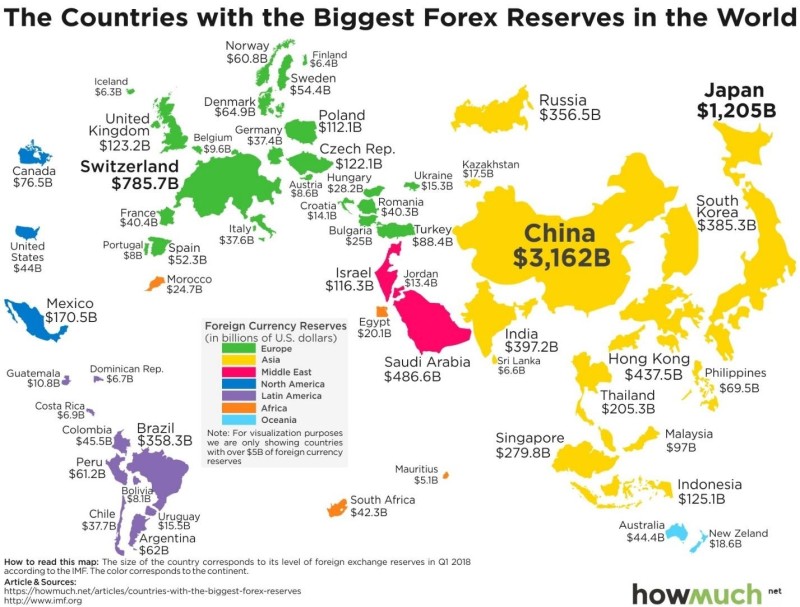 Countries with the biggest Forex reserves in the world. Source: HowMuch.net

The category of electronic money also includes cryptocurrencies - virtual money. Today, there are over 1,350 cryptocurrencies in the world. If we combine the cost of Bitcoin, Litecoin, Monero, Ethereum, and all the other popular cryptocurrencies, their total value equals to about $251.8 bln.

The capitalization of the Top-10 global cryptocurrencies is:

Yet, no accurate data on this type of money is available. It cannot be counted precisely because the information is constantly changing. However, it’s possible to define the range and tell the minimum and maximum figures, $720.6 trillion and $1.28 quadrillion, respectively.

Today, this precious metal acts as a commodity and currency. If a crisis occurs, its stock serves as some kind of safety bag and helps to regulate the economy. That is why many world countries are striving to replenish their vaults with gold, and even export it from abroad. Global gold reserves are estimated by the World Gold Council at 34,564.95 tons, which is $1,826.5 bln. 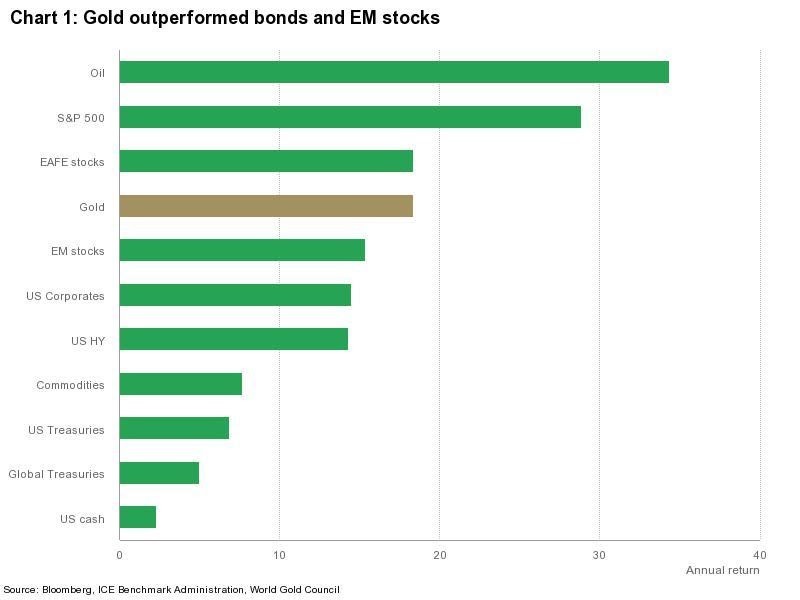 In addition to this valuable metal, countries has also started including currencies in their reserves since 1944. In 2016, the Chinese yuan was added to the traditional dollar, the British pound, the Japanese yen, along with the Swiss franc. According to the WGC, the United States is the first in the TOP 6 countries with the largest gold reserves. The IMF has a reserve of 2,814 tons, or almost $149 bln.

To calculate the value of the entire world's gold reserve, we can use the data from the World Gold Council. At the end of 2017, the Council published the latest relevant information, where the experts determined the entire volume of precious metal ever mined to be 190,040 tons. According to Wikipedia, taking into account the price for that period, $1,250 per ounce, the world's gold reserves amounted to $7.5 trillion.

According to the World Gold Council, 47.7% of all gold reserves exist in the form of jewelry. 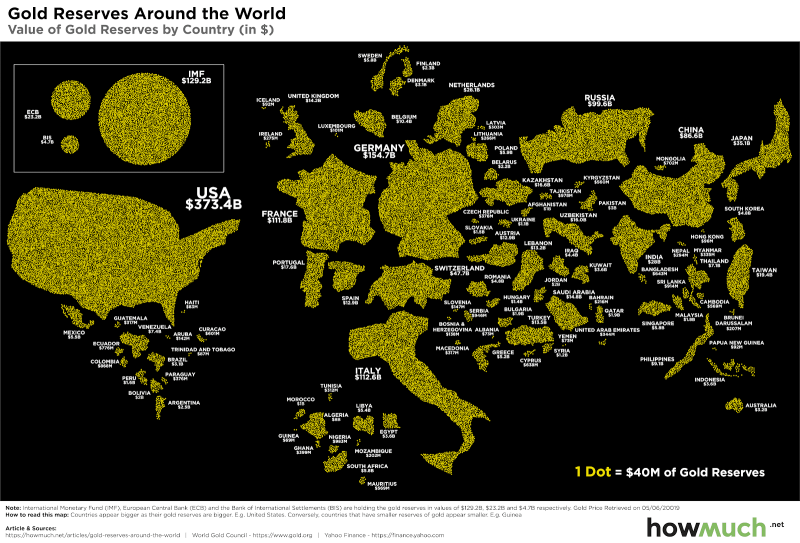 The wealth of the population

How much money do people own? This information can be found in “The Global Wealth Report 2019”, the study done by a reputable Swiss bank, the Credit Suisse. The report on the global distribution of wealth is not based on data on GDP per capita, but on the number of values owned by people. The total wealth in the world is $360.6 trillion.

HowMuch.net has shared infographics with data on the richest countries in the world for 2019.

How much do people earn?

According to the Credit Suisse, out of nearly $361 trillions of world wealth, 43.9% ($158.3 trillion) is concentrated in the hands of 0.9% of the population. For example, in Russia, 10% of the wealthiest citizens of the country account for 83% of all personal wealth. This indicator is much higher than it is in the USA (76%) and in China (60%). There are 18.6 million Americans and 4.4 million Chinese among the millionaires.

According to Forbes, out of the three most prosperous and most influential people, two of them two representatives of the U.S.:

Nearly 112 million people are forced to live on less than $3.20 a day. More than 32 million people do not have even $1.90 for for their daily expenses. (World Atlas of data)

What have been the changes in the amount of money?

Change in the gold reserve of countries in 2010–2020, thousand tons. Source: gold-silver.com

The entire money supply has also grown. If we talk about countries with the largest share of M2 (a measure of the money supply that includes cash and checking deposits (M1) as well as near money), over the past decade, it has increased 2.6 times in China, 2.3 times in the UK, 1.8 times in the United, by one third in Germany, and by 8 percent in Japan.

Since 2014, the list of cryptocurrencies has changed quite significantly. Back then, their number did not exceed 70, while today, there are 1300+ cryptocurrencies on the market. The list of Top-10 cryptocurrencies by market cap has been changing too, but one thing remains constant - the leadership of Bitcoin. It has always been the number one crypto asset.

According to unofficial estimates, if you divide all the money that is in the world equally, each inhabitant will have $10,600. If we take into account that as of February 2020, there are 7,778 bln people on the planet, the total wealth will amount to $82.45 trillion.

According to various analysts, world wealth was estimated at somewhere between $82.45 trillion and $360.6 trillion. It all depends on which categories and types of money were included in the calculation.

According to this study, all money in the world sums to a value between $812.24 trillion and $1.37 quadrillion, including:

Now you know that the answer to the question ‘How much money is in the world?’ depends on what exactly you count. If we consider only cash issued in the form of coins and banknotes (they are called the money supply M0), the amount for all countries is equivalent to about $4.5-5 trillion. If you add current deposits in banks (which at any time can be transformed into cash), it will be the money supply M1, which amounts to about $25 trillion (cash included). If we take into account term bank deposits, we get the money supply M2 – it is worth about $55 trillion. The M3 money supply also includes long-term deposits and government bonds: it is worth $75 trillion.

Those estimates are not accounting for electronic money, cryptocurrencies, money stored at home, and so on. Their amount is impossible to count. One thing is clear: cash is being gradually replaced by electronic money, and people seek alternatives to regular term deposits. Instead, they start investing in cryptocurrencies, try Forex and stock trading, and trust payment systems. The world economy is changing rapidly, just like the amount of money in circulation.