The First Joint-Stock Company, or How the Dutch East India Company Entered the IPO 400 Years Ago

The story about how the first public company was running its business several centuries ago. Today, there are dozens of exchanges around the world, almost every country has one or even a few. The shares of thousands of different companies are listed on these exchanges, changing owners daily. But which company pioneered the idea of ​​stocks? Which company was the first in history to IPO and to begin paying dividends to investors who believed in its future success?

First Public Company in the World

We are talking about the Dutch East India Сompany. It commanded almost 5,000 ships and enjoyed huge profits from its spice trade. The VOC was larger than some countries. In part, because of the VOC, Amsterdam was the financial center of capitalism for two centuries. Not only did the VOC transform the world, but it transformed financial markets as well. Now it is considered to be one of the first and most successful international corporations.

“Dutch East India Company” i.e. “Vereenigde Oost-Indische Compagnie” in Dutch, or simply VOC, was founded in 1602 by the Dutch in an attempt to protect their trade in the Indian Ocean. The term “East India” suggests that the company operated in what is now India and Southeast Asia territory. Namely, for a long time during history, the name “East India” was used for that area, while the Caribbean islands discovered by Christopher Columbus were called the “West Indies”. 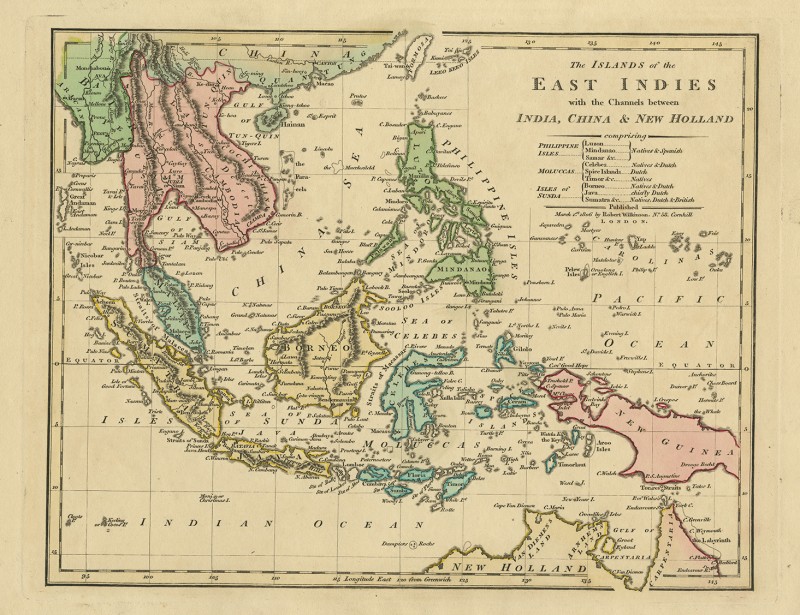 East Indies region, The VOC had a monopoly on trading there.

The VOC was granted a trade monopoly by the Dutch government that covered the territory between the Cape of Good Hope and the Straits of Magellan. With this monopoly, the VOC was also granted “the right to conclude treaties with native princes, to build forts and maintain armed forces, and to carry on administrative functions through officials who were required to take an oath of loyalty to the Dutch government”.

In addition, the VOC was able to get from the Dutch government such concessions that it became almost a “state within a state”. For example, it had its own army, was able to establish colonies, and forge its own money. It is believed that around the year 1637, the total value of VOC was about $7.4 trillion in today’s currency, which makes it the biggest corporation of all times. Among other things, the VOC also had its own army to deal with colonial...problems. By the end of the 17th century, more than 10,000 soldiers were serving in the company's private army.

The VOC had start-up capital of 6.4 million guilders. To put it into the perspective, that's roughly the value of 1,000 Amsterdam townhouses or $416 million (£314m) in today's money. How did it get a hold of all that money in the first place? The VOC was the first company to sell stocks to the general public, conducting the world's first proper IPO in 1602 when it was trying to raise capital. The minimum investment was 3,000 guilders or £500, which works out at around $195,000 (£160k) when adjusted for inflation. As the company's profits quickly soared, it was able to pay out bountiful dividends, much to the delight of its investors. 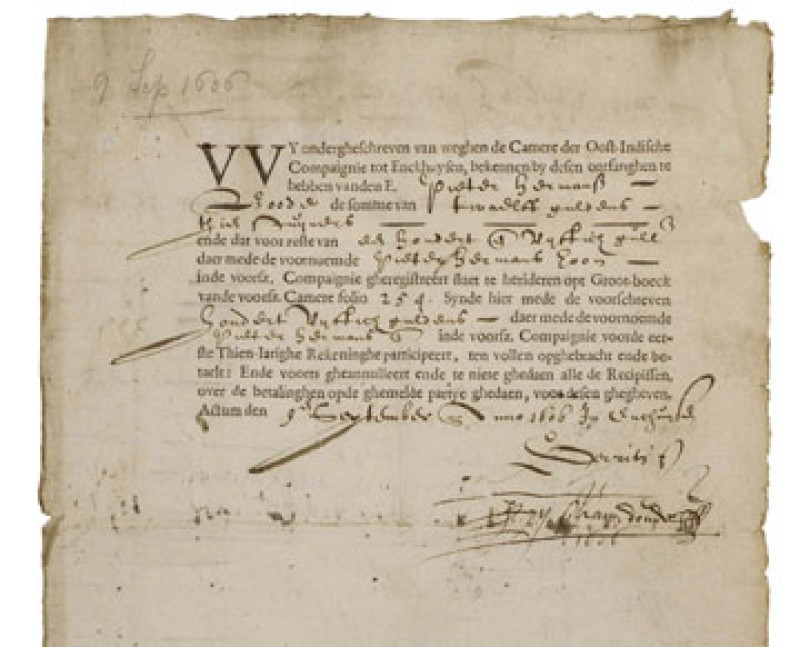 1606 AD certificate issued by the Dutch East India Company to Pieter Harmensz, a former male resident of Enkhuizen, who served as an assistant to the city's mayors.

The Spices Must Flow

The main value for the Company was spices. In India and Indonesia, there were plenty of them. Spices like pepper, cloves, nutmeg and cinnamon are widely available and cheap to buy today. Yet back in the 16th century these aromatic commodities, used for everything from treating illnesses to preserving food, were super-rare and exceptionally valuable in Europe. At the time, a small pouch of spices could easily buy a herd of cattle or sheep. However, in India and Indonesia, spices were much more common, and it was there that European traders sailed for them.

The original setup was simple: sail a fleet to Asia, buy spices, sail back, sell spices at the highest possible profit, and equip another fleet to do the same.

In addition to spices, the VOC traded other desirable products such as wine, cotton, silk, opium, sugar and tea, and even exported elephants at one time. The Company was expanding its business and moving further east, to China and Japan, finding gold, copper and silver. Trade network of the VOC. The company was engaged in trade within the region and sent luxury resources to Europe

Although the pre-VOC fleets as well as the first VOC fleet did not have explicit military goals, they certainly did go armed. In Europe, trade was also quite a violent activity in these times. Merchant ships trading within Europe always went armed, as piracy was rife and market competition was practiced by coercion and violence as often as not.

The Dutch fleets sailing to Asia not only had to be prepared for what might await them on the other side of the Cape, but they might also run into trouble with Spanish fleets before they had even left European waters. In addition, there were many other dangers: pirates, local natives in colonies, diseases and storms.

Generous Dividends for those at Risk

This was the reason the company started to issue the stocks, it was necessary to share the risks with investors. However, the same abundance of dangers led to the demand for high dividends by stockholders, because often only one ship out of three reached Europe. 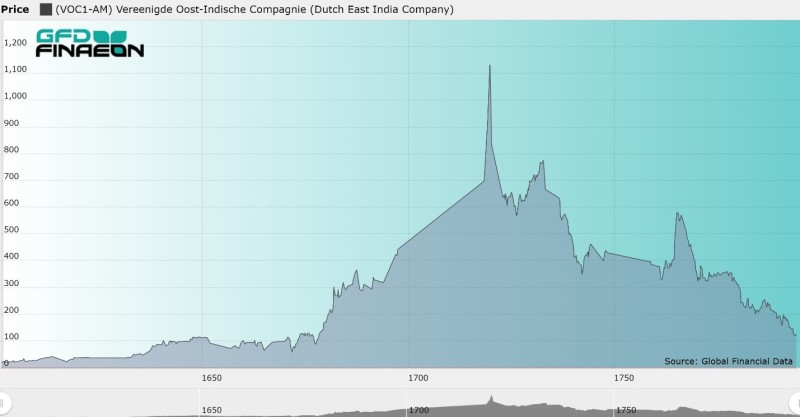 The average dividends of 20-30% of capital were high, but since the price of shares traded around 400 during most of the company’s existence, as the chart above shows, the actual dividend yield was around 5-7%, still better than Dutch bonds, but not that impressive.

The VOC provided a high return to investors, but not always in the way shareholders wanted. The VOC basically unloaded their inventories on shareholders in some years, providing them with produce, cloves, spices or bonds.

Innovations in the Amsterdam Stock Exchange and First Bear Raid

First of all, the Amsterdam Stock Exchange was established by the VOC and became the first “modern” stock exchange to trade paper stocks and bonds.

Later the VOC also transformed the Amsterdam Stock Exchange, causing a number of innovations to be introduced, such as futures contracts, options, short selling, and even the first bear raid. Isaac le Maire was the largest shareholder of the VOC in its early years, and he initiated the first bear raid in stock's history, selling shares of VOC short in order to buy them back at a profit and buy additional shares. 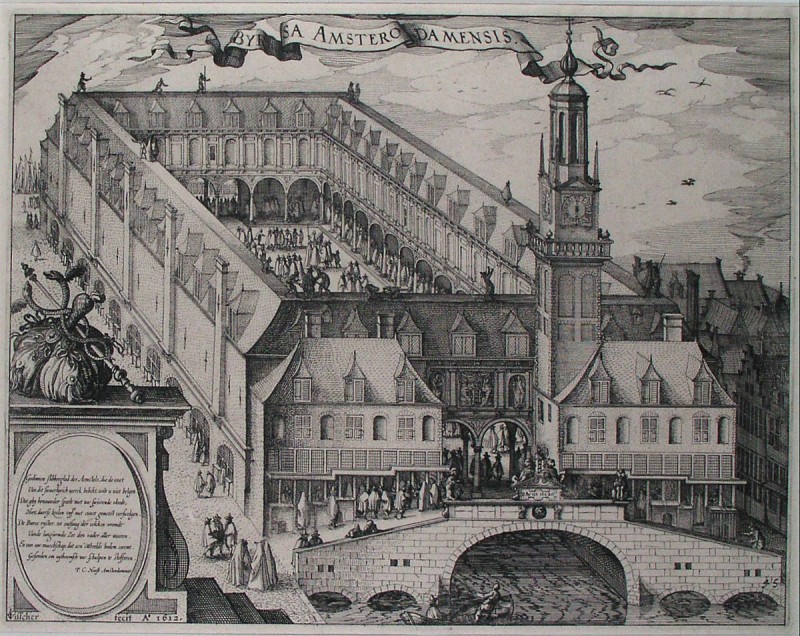 These actions also led to the first government regulation of stock markets, attempting to ban short selling in 1621, 1623, 1624, 1630 and 1632 as well as options and other forms of financial wizardry. The fact that these laws had to be passed so many times shows the regulations were not that effective.

The Golden Age of the VOC came to an end in 1670, as competition from other European giants, including the French East India Company and the Danish East India Company, intensified. Gradually, spices and other commodities from the Caribbean and South America flooded the market. Conflict with the England also interrupted the VOC's global operations, as did a decline in trade with Japan, which introduced limits on the export of gold, silver and copper.

From there on, the VOC switched from trading in high-value, low-volume commodities like spices to less profitable low-value, high-volume products, such as tea, coffee, textiles and sugar. This ushered in the start of the so-called Expansion Age, which lasted until 1730. Low interest rates made this less lucrative trade possible and the company relied on debt to keep its operations up and running.

Still, the company doubled in size from 1680 to 1730, though profit margins had been slimmed-down. Where profits had represented 18% of total revenues during the Golden Age (1630-1670), they now represented just 10% of revenues in this later Expansion Age (1680-1730). Overheads had risen and productivity stagnated, but dividends remained generous meaning that less money was put back into the company, relatively speaking. The company's capital decreased as a consequence and its debts spiked.

Moreover, the company found itself embroiled in several wars between Indonesian countries. They proved to be very expensive and a heavy burden on VOC's budget. With the need to continue paying high dividends, the company plunged deeper into debt. In addition, the pay of the company's employees in distant Asian colonies was extremely low. Therefore, employees were increasingly looking for ways of personal enrichment bypassing the interests of the company, the growing corruption became one of the factors that crippled the company.

The death knell came in 1780 with the Fourth Anglo-Dutch War. The conflict was catastrophic for the VOC, which saw its fleet decimated by half and its power in Asia severely eroded. Crippled by debt, the VOC was nationalized in 1796. 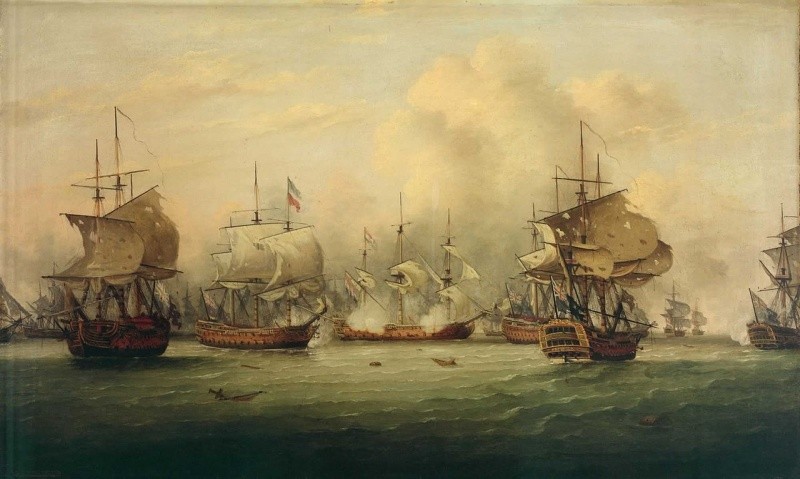 Dogger Bank battle, which decided the outcome of the war. After it, the Dutch ships did not risk going to sea

Despite the innovations that the company brought to the capitalist world, it was unable to transform itself. The company’s capital remained almost the same during its 200-year history, staying around 6.4 million guilders (about $ 2.3 million). Instead of issuing new shares and raising more capital, VOC relied on reinvestment. But high dividends allowed only a small share of profits to be reinvested, so the company had to collect more and more debt, which ultimately ruined it. However, the company became a pioneer in many ways, so its contribution has not been forgotten to this day.

The VOC also had a pioneering business model in terms of creating a corporate identity. The Company had its own logo, which was placed on all kinds of objects — official documents bore the VOC monogram seal, its packaged crates of goods were branded with it, just like the company's property — from cannons to porcelain. The monogram consisting of the capital V with an O on the left and a C on the right was familiar to countless people in Europe, Asia and Africa.